Hi there! I’ve got a fun technique with dies to share on today’s card. Most of the products that I’ve used on this one are My Favorite Things with the exception of a Sizzix embossing folder, so I’ll start at the beginning.

This is an A2 size card and I cut a piece of dark brown cardstock 4 1/8″ x 5 3/8″ for a mat under the rest of the elements. I then cut a piece of kraft cardstock 4″ x 5 1/4″ and taped the MFT Stitched Sentiment Label Strip die-namics cutting edge down towards the top of this cardstock piece.

Once it was die-cut, I was left with 2 separate pieces of cardstock.

I adhered the larger bottom piece with dimensional tape on the outside edges leaving a thin border of the cardstock mat underneath. Then, I die-cut this label strip die again from dark brown cardstock and embossed it with a Sizzix palm leaves embossing folder. I adhered it flat to the mat above my raised cardstock piece and then adhered the top portion of the kraft cardstock above it using dimensional tape again.

Now it was time for my fun die technique. I wanted a thin border of this label strip shape, so I die-cut the shape again from black cardstock. To get this thin strip, I placed the die cutting-edge down slightly below one edge of the shape, taped it in place and die-cut. Do this again with the opposite edge of the shape and you’re left with 2 thin border strips. Pretty cool? 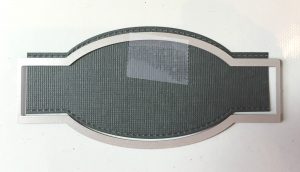 I adhered each strip above and below the die-cut shape area. You could adhere them directly to the edges of the kraft cardstock, but I liked it better slightly offset. It ended up looking less like a mat and more like a neat accent.

I adhered the rest of the leaves around the die-cut area and stamped a leopard image from the MFT Lovable Leopards stamp set on Neenah Desert Storm Environment cardstock. I colored the leopard with Copics and die-cut the image using the coordinating die-namics. I also used dimensional adhesive to adhere the leopard. 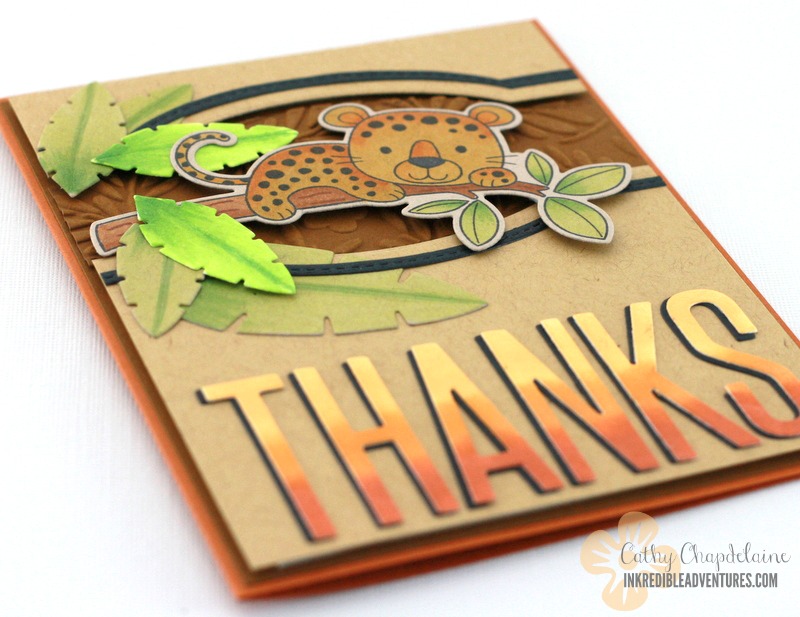 For the sentiment, I die-cut the MFT Thanks die-namics from white cardstock and inked them in an ombre color scheme with Memento inks in Cantaloupe, Peanut Brittle and Potter’s Clay. To make them stand out a bit more, I die-cut the Thanks die again from black cardstock and adhered each inked letter slightly offset on a black letter to create a shadow effect. 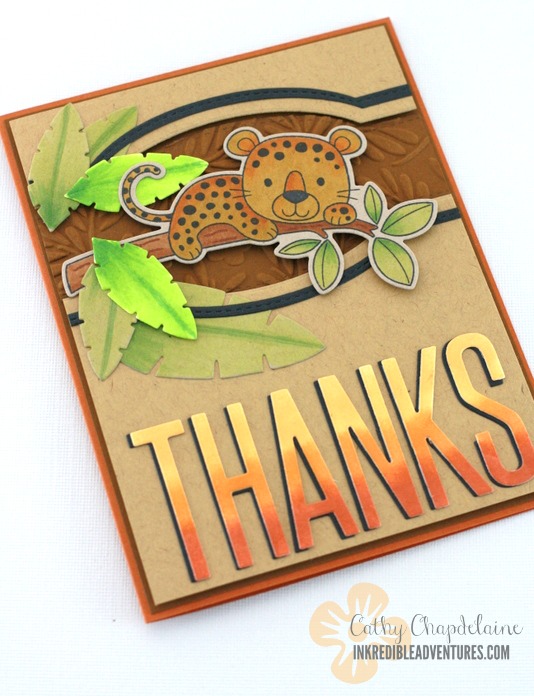 I hope you enjoyed today’s card and try this die technique out on various shapes! All kinds of possibilities! 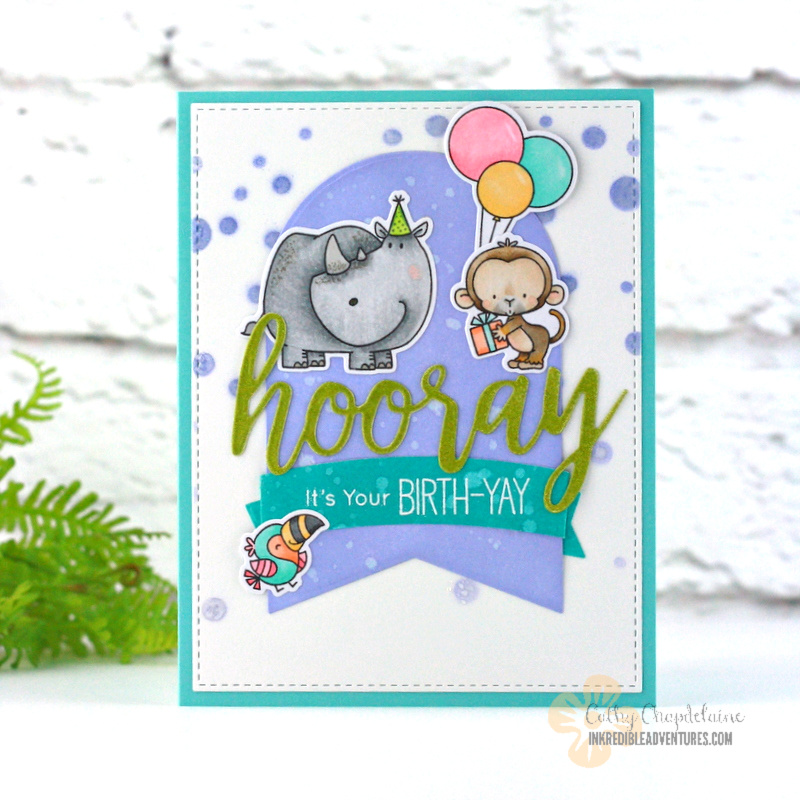 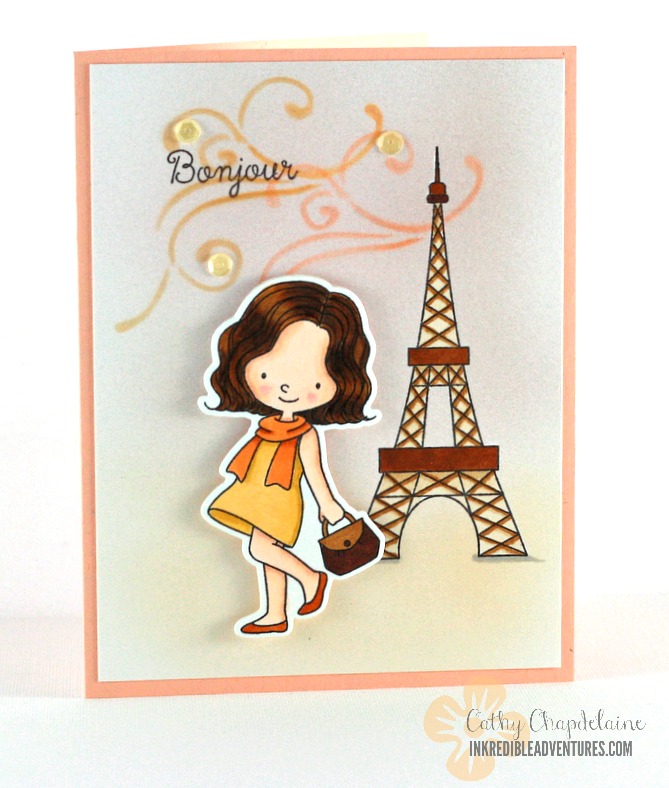 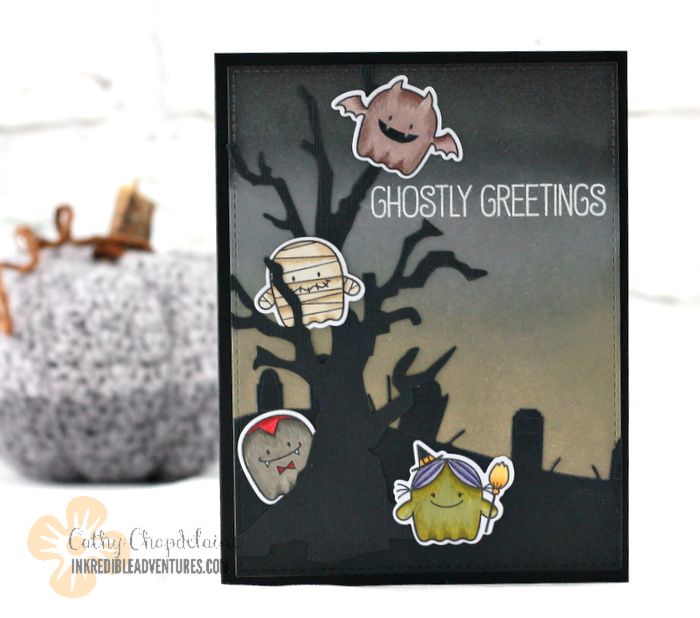